Installing ClearOS with LVM and RAID

Recently I installed ClearOS Enterprise 5.2 SP1 as my home server/gateway.  During the installation, I was surprised to find that the installer has very limited supported for LVM and RAID.  This however turned out be a blessing.  After some experiments, I arrived at a solution:  first I booted into the rescue mode to create the logic volumes, then I used the custom layout option to install ClearOS.  This solution not only gave me LVM on RAID, it also allowed me to fine tune my setup. The following is a tutorial on how to install ClearOS on a system with ext3, LVM, RAID5, and Advanced Format hard drives.

For this tutorial I will use a virtual machine instead of a real system because I don’t have spare Advanced Format hard drives. In any event, the calculations discussed here remain valid even on a virtual machine.
Goal of this tutorial: Install ClearOS Enterprise 5.2 SP1 on a system with three AF 512e hard drives. Combine the hard drives into a RAID5 array. Manage this array with LVM. Install OS on one logical volume. Use the remaining space as shared volume under Flexshare.

The first step is to boot into ClearOS rescue mode. Insert the CD, boot the system, and enter “rescue” when prompted by GRUB.  Select the appropriate language and keyboard.  Choose the local CD-ROM as the rescue image source.  It is not necessary to start the network interfaces.  Skip the search for an existing ClearOS installation. When the system is ready, a bash shell prompt will be on the screen.

Both “fdisk” and “parted” are available in the rescue mode. Instead of getting into details of either tool, I will just show how the hard drives are partitioned.

Please note that on every disk the first partition starts from sector 64 and the second starts from sector 195200.  Since both 64 and 195200 are divisible by 8, partition boundaries line up with 4 KiB hard drive sectors. Also, the ID of the second partition is set to 0xfd, for “Linux raid autodetect”. This allows the Linux kernel to start RAID arrays automatically.

A quick explanation on “chunk”: A component device in a RAID5 array is divided into chunks. Parallel chunks from different devices form a stripe. Every stripe has a parity chunk. The remaining chunks hold data. The chunk size should be given to “mkfs.ext3” when setting up an ext3 file system.

The “–dataalignment 256k” option of “pvcreate” ensures that LVM data starts from a stripe boundary. “–dataalignment 256k” tells LVM to align start of data on “/dev/md0” to a multiple of 256 KiB. Since 256 KiB is also the data size in a stripe, the effect is that LVM data starts from the boundary of a stripe. (Each stripe on “/dev/md0” has 2 data bearing chunks. Each chunk is 128 KiB, so each stripe holds 256 KiB data.)

The “-l 100%free” option in the second “lvcreate” tells the command to assign 100% of the free space in “raid_group” to the logical volume “flexshare”. This option is convenient. There is no need to determine how much space remains when it is used.

The final step in rescue mode is to format the logical volumes.

The “mkfs.ext3” command line has two options.  “-b 4096” specifies that ext3 file systems will use 4096-byte blocks, same size as the native hard drive sectors.  The second option “-R stride=32” tells “mkfs.ext3” that for the underlying RAID5 array each chunk is as large as 32 ext3 blocks. (128 KiB per chunk and 4 KiB per block yields 32 blocks per chunk.) As mentioned earlier, “mkfs.ext3” uses this information to avoid bottleneck.

Now the disks are prepared, reboot the system and start the ClearOS installer.  Follow the normal installation flow until the disk partitioning screen.  Here highlight “I will do my own partitioning” and select “OK”.

Several screens later the installer will come to the partitioning type screen, asking how the disks should be partitioned.  Here highlight “Create custom layout” and select “OK.” 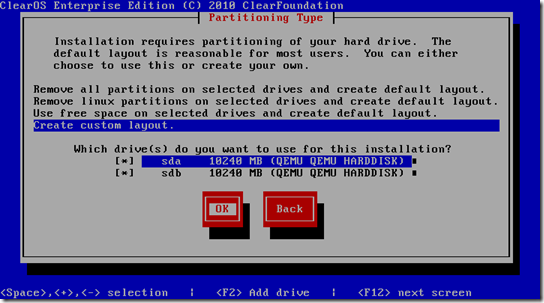 On the next screen is a list of all disks, partitions, RAID, LVM group, and LVM volumes in the system.  We’ll start by configuring the the root volume.  Highlight “LV root” and select “Edit”. 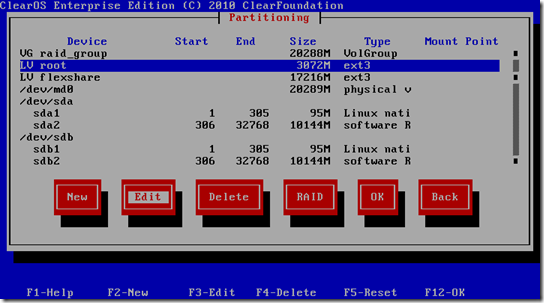 On the “Edit Logical Volume” screen specify “/” as the mount point. Make sure the “File System Option” field is “Leave unchanged” to keep the file system created in the rescue mode.  Now select “OK” to return to the device list.

Now let’s set up the flexshare volume. Highlight “LV flexshare” and select “Edit.”  On the “Edit Logical Volume” screen specify “/var/flexshare/shares” as the mount point.  Again make sure “File System Option” is “Leave unchanged”, then select “OK” to return to the device list. 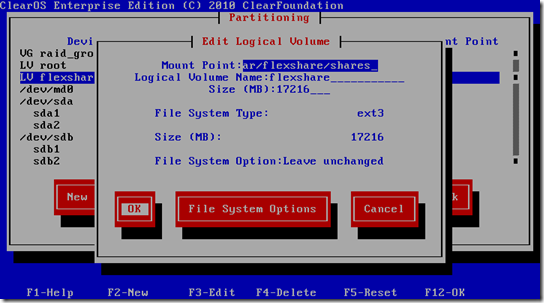 On the “File System Option” screen mark “Format as” and highlight “ext3”.  This tells the installer to format “/dev/sda1” as ext3 volume before store files there.  Select “OK” to return to the previous screen.

Now we’re ready to specify the mount point as “/boot”.  Select “OK” to return to the device list. 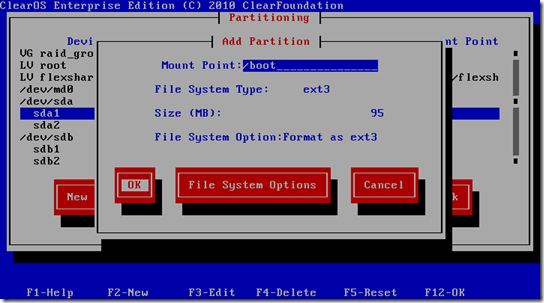 Since a swap volume does not have a mount point, just select “OK” again to return to the device list.

Now the device list shows the final configuration for the system: “LV root” to be mounted on “/”, “/dev/sda1” on “/boot”, “LV flexshare” on “/var/flexshare/shares”, and optionally “/dev/sdb1” and “/dev/sdc1” configured as swap space. After reviewing the list, select “OK” to continue installation.

Later the installer may ask to confirm choices of partitions, volumes, and swap spaces. It will also ask for GRUB options. File copying starts after these questions are answered.